Mark Boslough recently issued a ‘challenge’ to ‘deniers’ to bet against him that 2016 would not be a record breaking year in the GISS dataset, hotter even than 2015, the current ‘hottest year ever’. He seems to think that this single event will confirm that “global warming is real”. Strange man. Anyway, with a very strong El Nino (now peaked), it is virtually certain that global temperatures will peak (naturally) in 2016. Furthermore, with the GISS incorporating NOAA’s ‘pause-busting’ SST data, it is highly unlikely that 2016 will not turn out to be another ‘hottest year ever’. So no sceptic worth their salt is going to take that sucker bet.

A more interesting bet would be whether 2016 will exceed the warmth of the current warmest year (1998) in the RSS and UAH satellite datasets. RSS data for December 2015 is in; anomaly is 0.54, up from 0.43 last month. 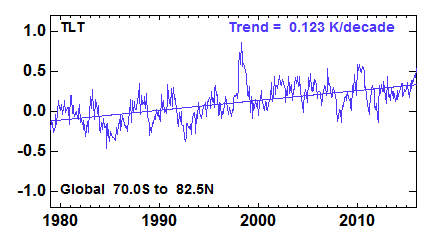 Mark Boslough wasn’t interested in taking up my offer of betting on this far less certain occurrence – surprise, surprise.

My personal opinion is that it’s entirely possible that 2016 will not turn out to be the warmest year in the satellite data. Even though, in terms of Nino 3.4 SSTs, the 2015 El Nino was more powerful than 1997, Nino 1+2 regions lagged quite a bit behind.

In this respect, the 2015 El Nino, for my money, resembled more a Central Pacific (Modoki) type El Nino than it did the 1997 very powerful canonical El Nino. Note also that Nino 3.4 in 2015 started nearly 1 degree higher than 1997, courtesy of the strong Pacific warming in 2014. The Met Office has a very interesting analysis of El Nino events, in which they say:

It would not surprise me therefore if 2016 fails to exceed 1998 as the warmest year recorded in the satellite data series. What of 2016 and beyond? There are three possibilities: the expected spike in global temperatures may initiate a ‘step up’ (like 1998 did), it may not affect global temperatures significantly, in which case the current Pause will continue, or it may initiate a ‘step down’ in global temperature via a very deep subsequent La Nina cooling. If we’re betting, my money is on the latter in late 2016/early 2017. If we get another ‘step up’ in global LT temperatures, I will be the first to admit that the anthropogenic CO2 warming theory may have something going for it, because many current climate indicators (AMO/AMOC/solar) point to imminent cooling.

Bob Tisdale has posted an updated graphic to the one above:

We can see that El Nino has clearly peaked in all regions. Nino 1+2 regions peaked considerably lower and several weeks earlier in 2015 than they did in 1997 and they are now declining quite rapidly. We shall soon see if this affects any resultant spike in global temperatures in 2016.